What is a Check Valve & What Do They Do?

Check valves can be found in most industrial applications.

These simple devices have an important role as they prevent reverse flow from occurring, thus ensuring the efficient operation of the device and preventing any damages.

In fact they are also sometimes referred to as one-way valves or non-return valves.

What is a Check Valve?

Check valves are one-way valves, which ensure that the flow takes place freely in one direction.

However if the flow turns in the opposite direction, the valve will close down so as to protect the piping, pumps, and other valves.

These valves are cheap yet very effective.

What Are Check Valves Used For? 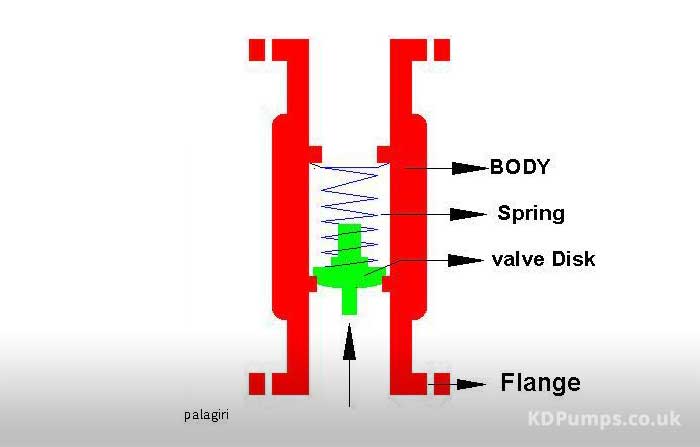 Check valves are used in various kinds of applications, especially in cases where a backflow might result in serious problems for the device or application, such as when the backflow could be contaminated.

Sewer lines for instance have non return valves to ensure that the waste does not re-enter the system.

A reverse osmosis filter will also rely on a check valve so that the water passes through the filter in just one direction.

Centrifugal pumps rely on check valves so as to keep the water in the pipes, for instance.

Check valves are also used in HVAC systems, especially when these are in large buildings and so the coolant needs to be pumped many storeys.

The check valves in this case make sure that the coolant does not flush back down.

How Do Check Valves Work?

The check valve has two ports. There is the inlet and the outlet.

The valve allows the flow to occur in one direction.

The check valve relies on what is referred to as a pressure differential to work.

If there is a higher pressure on the inlet’s side, then the outlet side will open.

However, if the pressure is higher on the outlet side, then the valve will automatically close down.

This closure mechanism varies slightly according to the type of check valve, but the general idea is based on this premise.

Unlike other valves, check valves do not require a lever or actuator to operate.

A check valve requires a certain pressure level so as to open and allow the flow through it.

This pressure differential between the two outlets allows the check valve to work.

The cracking pressure is the term used to describe the minimum upstream pressure that is required for the particular check valve to open.

This varies from one valve to another according to the design and size.

It is important to make sure that the system or application manages to generate this cracking pressure so as to ensure that the check valve installed is suitable for it.

In case the upstream pressure falls below the racing pressure, or in cases where there is back pressure, which means that the flow is trying to move from the outlet to the inlet, the check valve will close.

The closing mechanism will depend on the valve’s design.

However the basic idea is that the back pressure will push a disc, gate, diaphragm or sometimes a ball, against the opening.

By doing so the outlet will be sealed.

In some valves this closing process may also be assisted by the force or gravity, and sometimes by a spring.

The installation orientation is of critical importance in the case of check valves.

This is because the valve only works in one direction.

Generally you will find an arrow on the housing of the valve.

This will be pointing to the flow direction that is required.

If there is no such signal, you will need to examine the check valve so as to make sure that it is installed properly, according to the intended flow direction.

Otherwise there will be a build-up pressure which could end up causing damage.

There are various kinds of check valves.

They vary in terms of designs, sizes as well as the materials that they are made from.

These are very common types of check valves.

They have a simple design and it is easy to understand how they work.

When the flow enters the inlet, and as long as it exceeds the cracking pressure and the spring force, it will push the disc.

Upon doing so it will open the orifice and let the flow move through the check valve.

Once the input pressure is not sufficiently high, or if there is back pressure, the spring will push the disc back against the orifice.

Hence the valve will be sealed shut.

This mechanism allows for a quick reaction time.

These valves can be installed in a horizontal or vertical orientation.

The main difference between them is that the spring and the moveable disc are positioned at an angle, which creates a y-shape.

This is where the name of the valve comes from.

This type of valve has a slight advantage over the previous kind because since the components are positioned at an angle it is considerably easier to inspect and service it while it is still connected.

Having said that these valves are a bit bigger and so take up more space in the system.

Ball check valves use a spring-loaded ball or a free floating one.

This ball rests on the sealing seat.

Hence it closes the orifice.

The sealing seat is conically tapered so that it can guide the ball into the seat, thereby creating a positive seal which will be able to stop the reverse flow.

Once the pressure in the inlet surpasses the cracking pressure, the ball will be dislodged from the seat and allow the fluid to flow.

If not, or in cases where there is back pressure, the ball will close the orifice.

Diaphragm check valves include a rubber diaphragm which flexes open whenever the inlet pressure increases.

Most of these valves will not rely on cracking pressure since the free floating self-centering diaphragm will make them in a normally open mode.

To become normally closed the inlet pressure will need to overcome the diaphragm’s elasticity.

In case of back pressure, the diaphragm will be forced against the opening, and it will effectively seal the opening and thereby prevent any backflow from happening.

These types of valves are mostly used in vacuum or low pressure applications.

Lift check valves are composed of a guided disc which lifts up off the valve seat.

Upon doing so the flow is enabled. In these valves the cracking pressure will need to exceed the gravity or the spring, so as to keep the disc in a vertical line.

Generally these valves need to make a 90-degree turn, but this varies from one check valve to another.

As the inlet pressure diminishes, and does not exceed the cracking pressure, the valve will close by the spring or by gravity, or by backpressure.

Swing check valves, also known as tilting-disc check valves include a disc positioned on a hinge.

This swings open by inlet pressure.

When this decreases, the disc will then swing shut.

In such a way they can operate like a normal check valve to prevent backflow.

But as there is also an external mechanism, this can be used to override it to keep the valve open or closed.

Hence this valve can function like two valves would.

Butterfly and wafer check valves are also quite common and can be used interchangeably.

These have a butterfly, wafer or style disc on a hinge.

There is also a spring, and whenever the inlet pressure exceeds the cracking pressure, both sides will open up.

When there is back pressure or a lower pressure, the disc will close it off.

In this valve the flow will go through a soft tube.

The end of such a tube has a flat shape which looks like a duck beak, thus the name of the valve.

The flow will open this end and allow the fluid to pass, and once the pressure subsides the duckbill end will return to the original shape and cut off the flow.

This is basically a check valve which also includes a strainer on the inlet part.

These valves close down by means of a spring. The strainer’s role is to prevent debris from entering the valve, thus preventing any clogs.

In wastewater applications check valves make sure that waste water does not re-enter the system.

Otherwise it will cause overflow or contamination.

In the case of drinking water applications the role of the check valves is to make sure that no debris enters the water line.

In these applications usually duckbill or foot valves are used.

Reasons to Replace a Check Valve

The check valve has an important role and it is crucial to ensure that it is replaced when necessary.

You should not allow the check valves to end up getting jammed or corroded as they may fail in operating properly.

Scale or debris may also get trapped between the valve’s disc or ball, and some parts could get damaged.

Valves could also stick or leak, and you might notice warning signs such as vibrations, or chattering noises indicating that the valve may fail.

Plastic valves generally should be replaced every 5-7 years while those made from rubber can last between 35 and 50 years!

Check valves are basic, low cost components, which have a very important role to play in many mechanical operations.